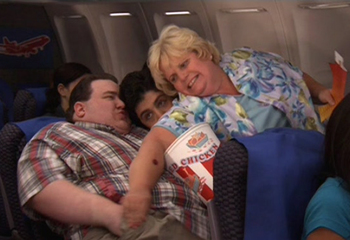 Poor Josh, stuck with obnoxious other passengers and cramped seats while Drake is off sitting with hot girls.
"We were herded down a too-warm jetway into a cabin that was ridiculously over-crowded. [...] The seats were too small for someone of my size, much less the overweight matron sitting next to me in the middle seat. I had to share the armrest with her for the entire flight to Chicago. Her flab spent the whole trip trying to slip over the armrest and crawl into my lap. Ugh."
— Ayla Goodkind, Whateley Universe
Advertisement:

Ah, airplanes. What could be better than flying through turbulent winds, with a Screaming Plane Baby down the aisle, a kid who won't stop kicking your seat, and getting stuck sitting with annoying strangers? Not to mention the food sucks, and the flight itself could take several hours — worse if there's a delay. Any of these factors can make a ride horrible, and it's even worse if there's a combination. Worse still if someone has a flight phobia.

So it's no wonder that airplane rides in fiction have a tendency to be portrayed as uncomfortable at best and absolutely miserable at worst. Whilst this can be Truth in Television, the problems with flight travel tend to be comically exaggerated for the sake of making the protagonist suffer. First-time fliers will never want to go back, those with a phobia will be given confirmation that airplanes are awful, and everyone will just be happy when the plane finally lands.

Common problems include being stuck with annoying passengers, a lack of space, bad food, and flight sickness. In the worst case scenario, the plane may crash, in addition to everything else, just to underscore how bad the flight is.

Compare Subways Suck and Buses Are for Freaks.

The cabin that Dilbert, Wally, and Alice are in is first class apparently... The Boss is in coach, which is outside the plane...

The cabin that Dilbert, Wally, and Alice are in is first class apparently... The Boss is in coach, which is outside the plane...