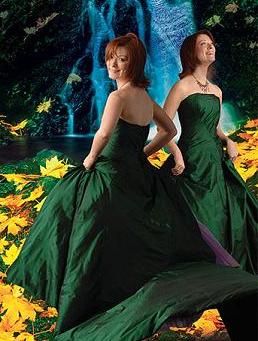 You'll never be the sun, turning in the sky, and you won't be the moon above us on the moonlit night. And you won't be the stars in heaven, although they burn so bright; but even on the deepest ocean, you will be the light.
Advertisement:

Órla Fallon (born Órlagh Fallon, 24 August 1974) is an Irish singer/songwriter hailing from Knockananna, County Wicklow, Ireland. A former member of world-renowned Irish chamber choir Anúna, she burst onto the World Music scene when she joined ensemble Celtic Woman as one of its founding members. She remained with the group for four years, departing in 2009 to embark on a solo career.

Her trademark is her haunting, ethereal voice, evocative of ancient Ireland. Her music ranges from classical Irish songs to folk to pop with a heavy Celtic influence, and she wrote fan favorite "Dancing in the Moonlight" for her album Distant Shore. She is a talented harpist as well as a singer, and has accompanied herself on numerous occasions - most notably while performing "Isle of Inisfree" and "Carrickfergus" with Celtic Woman. She also does so with "Distant Shore" and "Dancing in the Moonlight", among others.

In terms of personality, she is soft-spoken and gentle, more artist than entertainer. She tended to fade into the shadows next to vibrant, energetic Máiréad, cheeky and alluring Méav, warm and motherly Lisa, and youthful, sparkling Chloë - particularly in Celtic Woman's early days - but as her career has gained steam she has developed a subtle, quiet confidence that has made the most of her warm and openhearted spirit and enraptured fans on both sides of the Atlantic. She may not be a household name, but those that know her love her, and those that love her do so passionately and absolutely; and she returns that love with unbridled warmth and generosity.

Recently she has used her growing prominence to promote public television, filming two specials for PBS - A Celtic Christmas aired in November 2010 and My Land in February 2011. 2011 also saw her tour the United States, beginning in February, for roughly fifty concert dates across the country.