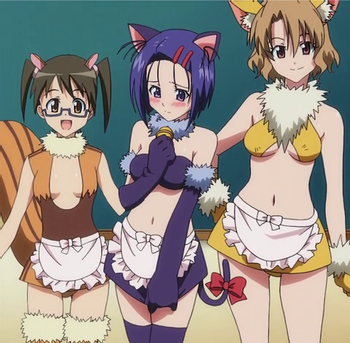 Uh, I'm freezing here.
Any more great ideas? Why don't you strip down and have a hundred people stare at you?!
— Sue Storm, Fantastic Four (2005)
Advertisement:

If the writer or artist wants to include a ridiculously sexy female character who is always dressed in skimpy outfits, they may choose to give a reason for this character to dress and behave the way she does. Maybe she's The Vamp and is using it as a means to get what she wants from men, or maybe she's the Innocent Fanservice Girl, who simply doesn't know any better or the Shameless Fanservice Girl who doesn't care.

And then there's this girl. She would prefer to dress modestly, and really doesn't like being ogled by men, but, for some reason, the universe conspires to have her dress in skimpy outfits or end up naked. Her clothes may get ripped in combat, disappear or get stolen by someone, she may be pressured into it by her friends, she may have to provide a sexy distraction to get past the idiot guards, the villain may have kidnapped her, had his servants bathe her and forced her to wear a metal bikini... any excuse will do, but whatever the reason, she will always be unhappy about it. Sometimes she may even have a Naked Freak-Out, or will give people a "No Peeking!" Request.

Often Played for Laughs as a form of Butt Monkey-ness, although serious variants are also possible. After all, much of the humour of the situation depends on whether you think women being unwillingly stripped-down carries a host of Unfortunate Implications or is as harmless as any other fictional kink. If the author wishes to make a point about gender issues, this kind of Fanservice will often be toned down or Deconstructed.

It's worth noting that Fanservice in real life is practically never reluctant - in fact girls and women who go out wearing skimpy clothes are most often incredibly proud of their beauty, to the point of not caring if somebody objects to them flaunting their assets. Though this is usually because it's their choice to show their bodies. Even someone who works as a stripper is still likely to feel some embarrassment if, for example, the fire alarm goes off while they're taking a shower and they're forced to run out of their apartment clad only in a towel.

A frequent consequence of the Third Law of Gender-Bending. This trope is also not exclusive to females and may also happen to the Mr. Fanservice. Contrast with Shameless Fanservice Girl, who has no reservations about flaunting their sex appeal. Also contrasts with the Token Wholesome, who's allowed to maintain their modesty.