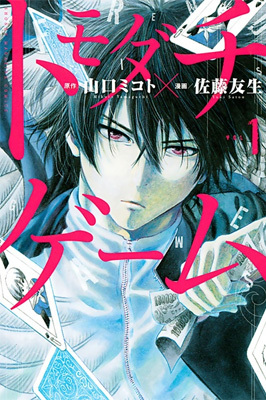 In this world, there's something more important than money. It's friends.
Advertisement:

Yuuichi Katagiri is confident that he and his group of friends will stay close, now and forever. He's even managed to save up enough money to go on the school trip with them, despite being dead broke all the time.

However, his life takes an unexpected turn when he and his friends are subsequently kidnapped. They're told that one of them carries a debt suspiciously exact to the class's funds for the school trip—mysteriously stolen earlier—and that said debt has now been divided among them. To pay it off, they are made play the Tomodachi Game: a game where, to win, you must not doubt your friends.

It should've been simple, but it doesn't take long before cracks begin to form. And then, worst of all, Yuuichi realizes there's a traitor in their group—one who seems determined to tear apart their friendship no matter what...

It received an anime adaptation by Okuruto Noboru, which began airing on April 2022.

Warning: Tomodachi Game is a series heavily dependent on twists and characters being more than they appear. Therefore, spoilers ahead are inevitable.