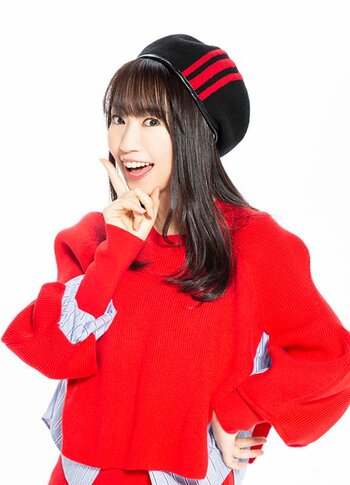 Born Nana Kondou on January 21, 1980 in Niihama, Japan, Nana Mizuki is a Japanese voice actress and singer best known for her powerful voice, which she often converts to a song so mind-blowingly powerful it's awesome. She didn't do much when her career began in 1997, until people started noticing her as Hinata Hyuga, one of Naruto's popular characters. Things really went up for her when she voiced Fate Testarossa and thus was her ultimate start of great fame.

Her music has garnered commercial and critical hits and there have been many times where she has gotten #2 on Oricon (Japan's equivalent of the Billboard Charts), and she may be the first actress to break into the mainstream Japanese music industry. In 2007, she became the first Seiyuu Award winner for the Musical Performance category with "Justice to Believe". On the week of June 15, 2009, she achieved the distinction of being the first seiyuu to nab the #1 position in the Oricon Weekly Album chart

with her album, Ultimate Diamond. Since then she has won numerous awards and broken numerous records, most in regards to her success as a seiyuu in the J-Pop world. In 2014, the Japanese Government has honored her as the Rookie of the Year in the Popular Entertainment division

She has a markedly geeky interest in Buddhist esoteric doctrine. And in a message to the fans, she also admitted to being a Pretty Cure fan and how happy she was to get the lead role in HeartCatch Pretty Cure!.

She also did the voice acting of a Windows 7 mascot and Quinn Fabray (Dianna Agron) in the Japanese dub of Glee.

Mizuki and Yukari Tamura are both receiving the ultimate honor: their very own Nendoroid figures

In a survey by Oricon, she's the top selling voice actress

. By how much against 2nd place? More than four times.note Interestingly, no.2 on the list is Magical Girl Lyrical Nanoha co-star Yukari Tamura, who voices ... Nanoha.

For your listening pleasure, Mizuki's own Crowning Music of Awesome page.

"You have gotten on my very last nerve!"