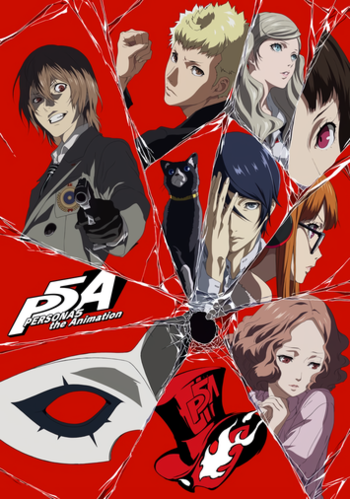 The game is on.
The world is not as it should be. It is filled with distortion, and "ruin" can no longer be avoided.
Those who oppose fate and desire change...From time to time, they were called "Tricksters".
You are the Trickster...
Now is the time to rise against the abyss of distortion in this world.
Advertisement:

Persona 5: The Animation is the Animated Adaptation of Persona 5, produced by CloverWorks, A-1 Pictures' former Kōenji Studio. It first premiered on April 7, 2018 with an initial 26-episode run, and a special named "Dark Sun..." aired on December 30, 2018. A second special named "Stars and Ours" aired on March 23, 2019. A third special focusing on Goro Akechi, named "Proof of Justice", included in the volume 11 DVD and Blu-Ray releasenote Alongside the disc release of "Dark Sun", was released on May 29, 2019. A fourth special, "A Magical Valentine's Day", was included in the volume 12 release alongside the disc release of "Stars and Ours", and was released on June 26, 2019. An English dub was released as part of the Complete Series Blu-Ray set on September 29, 2020.

One night while walking home, Ordinary High-School Student Ren Amamiya spots a drunk man assaulting a woman and trying to force her into his car. Stepping in, Ren forcibly removes the drunkard off her, causing him to stumble, hit his head, and subsequently press charges. Ren is falsely convicted of assault and sentenced to a year-long probation in Tokyo, staying with Sojiro Sakura, a distant friend of his parents. On his first day attending Shujin Academy, Ren and fellow outcast Ryuji accidentally stumble into a mysterious Mental World known as the Metaverse: a place where cognition becomes reality, and real-world locations are twisted by the thoughts of humans. Within this world, the most corrupt humans have subconsciously created mental fortresses called "Palaces" where their innermost vices and desires are allowed to run rampant. If someone is able to steal the "Treasure" that forms the heart of the Palace, then the Ruler's vile desires will be erased.

With the aid of a mysterious smartphone app and the inner-power of "Persona", Ren, along with new allies Ryuji, Morgana, and Ann decided to use the Metaverse to strike back against the rotten society that has unfairly stigmatised them, forming The Phantom Thieves of Hearts dedicated to stealing Treasure and forcibly reforming the corrupt.

With the game's lead character designer, Shigenori Soejima, the original game's soundtrack as well as new tracks from series composer Shoji Meguro and vocalist Lyn, and all of the original Japanese voice cast on board, P5A creates an almost seamless transition from the in-game depictions of the characters to animated form.

Please note that Persona 5: The Animation follows the plot of the game almost exactly, so beware of spoilers for the game on this page, and vice-versa.

That which opposes fate and desires change... From time to time, they were called "Tropes":