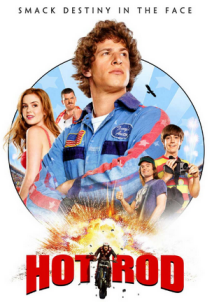 Hot Rod is The Lonely Island's first venture into feature films, released in 2007 and starring Andy Samberg (as Rod) and Jorma Taccone (as Kevin), with Akiva Schaffer directing.

Wannabe stuntman Rod is desperate to follow in the footsteps of his late father and also win the respect and love of his mean Step-Father, Frank (Ian McShane), by defeating in him in a fight and proving himself a man. Unfortunately tragedy strikes and Frank is diagnosed with a fatal heart condition. The operation needed is too expensive, so Rod and his gang set out to raise the money by performing the greatest jump he has ever attempted to save Frank's life, so he can finally kick his ass when he's better.