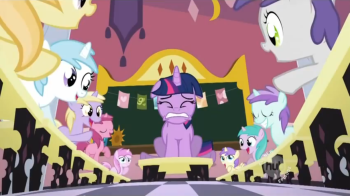 She'll be sent back to MAGIC KINDERGARTEN!
"This is not happening. The cruel slow-motion laughter is just your imagination."
— Sue Sylvester, Glee
Advertisement:

The inversion of Laughing Mad - a character's humiliation is depicted with a pan around a group of people laughing at them, often in slow motion. May be more or less fancifully depicted, ranging from a simple shot of a bunch of people pointing and laughing, to a Fish-Eye Lens low-angle "swallowed up by the floor" shot Whip Panning from Grotesque sneering face to sneering face.

Can occur in bad dreams, or can just be an Imagine Spot. If it happens for real, it's probably courtesy of The Freelance Shame Squad.

Can be used in Flashback to set up They Called Me Mad! and/or Who's Laughing Now?

The Elites surround Community Sue with their "Circle of Shame".

The Elites surround Community Sue with their "Circle of Shame".