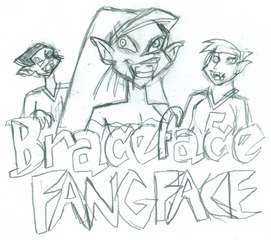 Trading in the braces... for the undead!

Braceface! (The vampires have claimed me)
Bloody! (Must bite all I see)
Forever young!
Time for some undead fun!
Fangface!

A Fan Webcomic featuring the characters of Braceface, it was featured on the vampire-centic site VampYou as well as The Duck.

The comic has Sharon Spitz and her group making friends with a boy named Stormy after he runs into Sharon one day at school. After hanging out with the bunch for a few days, Stormy invites them back to his house since he has it to himself after his parents go off on a trip.

To say the least, the group end up finding out more about Stormy than they wish, and most won't make it out without a new hunger for blood. As those that fall to Storm's fangs, increasing HIS ever-growing army of undead and becoming instantly loyal to him, the survivors try to escape to warn the town. But even then it might not be enough to stop them, especially going up against former friends and family who are now monsters. Can Sharon and her remaining friends save Elkford before everyone in town gains their own pearly canines, bloodlust, and animalistic nature while submitting to Stormy's undead rule?

A great read if you're a fan of Braceface, vampires, or both in general. Can be read on The Duck

as well as Vamp You

and most recently Smack Jeeves

Has a spin-off: Brock of the Undead

Tropes from the comic include: