Film / The Satanic Rites of Dracula 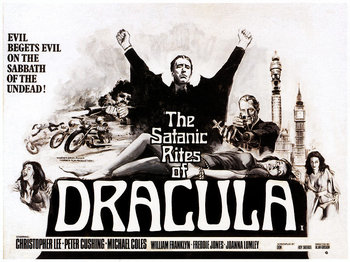 The Satanic Rites of Dracula (or Dracula and his Vampire Bride in some countries) is a 1973 Hammer Horror film and a sequel to Dracula A.D. 1972, the second of the two Dracula movies to take place in the modern world.

The film see a British Secret Service agency looking into a cult that practices dark rituals, of which they include the help of Professor Lorrimar Van Helsing (played by Peter Cushing). As they get closer into the matter they find that the cult has once again resurrected Dracula who plots to take over the world with a deadly virus. Leaving it up to Van Helsing and the agents to stop him.

This film was the last time Christopher Lee played the role of Dracula onscreen (if you don't count Frankenweenie which was more of a joke cameo. And the french comedy Dracula Père et Fils by Édouard Molinaro, filmed in 1976.)