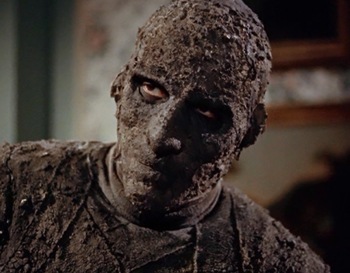 "He who robs the graves of Egypt, dies."
Advertisement:

The first Hammer Horror film to feature, yes, a Mummy, released in 1959 and reuniting the director (Terence Fisher) and the stars (Peter Cushing and Christopher Lee) of the studio's previous hits The Curse of Frankenstein and Horror of Dracula.

In 1895 Egypt, a team of British archeologists led by John Banning (Cushing) opens the tomb of Princess Ananka (Yvonne Furneaux), despite warnings of a death curse which will fall upon any desecrators. Three years later in England, a vengeful Egyptian man arrives and unleashes the living mummy Kharis (Lee) on the men. But the mummy's revenge is complicated when he discovers that Banning's wife Isobel is the spitting image of his beloved, long-dead Ananka.

John of looting and desecrating graves and taking what he finds to the British Museum.