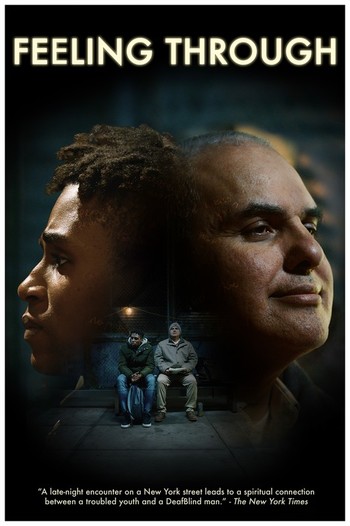 Feeling Through is a 2019 short film (19 minutes) directed by Doug Roland.

Tareek is a homeless teenager living on the streets of New York. He texts a friend with hopes of getting a place to crash for the night but is rebuffed. He texts a girl he knows, and is waiting to hear from her, when he sees a man on a lonely street corner holding a sign.

The man is Artie, and he is both deaf and blind. The sign he's holding announces that he'll need help crossing the street. Tareek guides him across the street and to a bus stop, where they bond, with Artie scribbing what he wants to say on a notebook while Tareek traces letters on Artie's hand.