Chained to a Rock 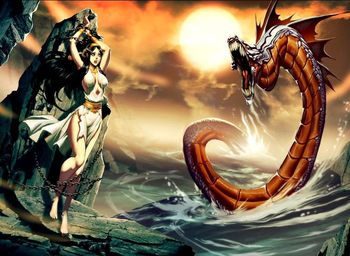 Now Time's Andromeda on this rock rude,
With not her either beauty's equal or
Her injury's, looks off by both horns of shore,
Her flower, her piece of being, doomed dragon's food.
Time past she has been attempted and pursued
By many blows and banes; but now hears roar
A wilder beast from West than all were, more
Rife in her wrongs, more lawless, and more lewd.
— Gerard Manley Hopkins
Advertisement:

A character (more often than not: young, female, attractive, royal, and wearing a revealing outfit or sometimes nothing at all) is chained to a rock, wall, or hard surface. The reasons for this vary; maybe she has been kidnapped, maybe she's the Action Girl who needs to be kept out of the bad guy's way, and maybe she will be eaten by a monster/alien/whatever. The classic explanation is that she is being sacrificed to appease the monster or whoever sends it. This Damsel in Distress will more often than not be saved by a handsome hero.

If a monster is involved, sometimes the princess is the first woman put up for slaughter; other times she is only the latest of a long line of sacrificial maidens. Why a hero never stepped up to save them is a question rarely asked. In this case, it is likely that the king has made a plea to slay the monster and rescue the princess, often offering her hand in marriage or the Standard Hero Reward to any man who can do it.

As a trope, this is Older Than Feudalism, going back to Greek Mythology.

Compare Chained to a Railway, Breaking the Bonds, Bound and Gagged, Unwilling Suspension.