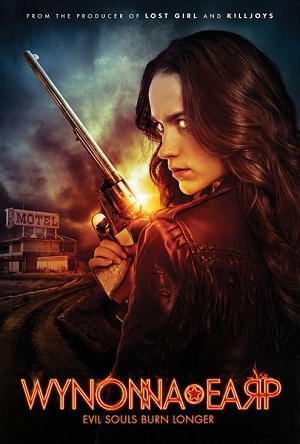 It is an adaptation of the Wynonna Earp comic book and tells the story of one Wynonna Earp, a descendant of the famous Old West lawman Wyatt Earp, who as his heir must defend the town of Purgatory from revenants, the 77 criminals who were killed by Wyatt’s gun and then rose as undead to hunt down his family. But as time goes by, Wynonna discovers that the revenants are only the tip of the iceberg, and she and her allies will have to contend with an ever-increasing host of supernatural threats descending upon Purgatory.

The show was renewed for a second season during 2016's San Diego Comic-Con, which aired in 2017. A third season was announced at 2017's SDCC, and it started airing in July of 2018. A fourth (and final) season was announced at 2018's SDCC and was originally set to air in 2019; however, financial problems delayed production, causing it to be rescheduled to air in 2020, only to be delayed again due to the COVID-19 Pandemic. Ultimately, it was announced that the first half of Season 4 (which had finished production prior to the pandemic) would air in July of 2020, with the second half intended to air at a later date, eventually announced to be March 5, 2021.

Not to be confused with Wynonna Judd.

Wynonna and Doc need to take a decontamination shower after they get covered with monster goo.

Wynonna and Doc need to take a decontamination shower after they get covered with monster goo.