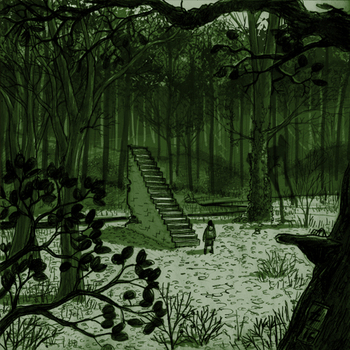 Don't touch them. Don't look at them. Don't go up them. Note  Art by Luckaz Godlewski.
I'm a Search and Rescue Officer for the US Forest Service, I have some stories to tell.
Advertisement:

Search and Rescue Woods is an eight-part Creepypasta by Kerry Hammond, published on Reddit under the username searchandrescuewoods

. It was originally posted to the Nosleep subreddit in August of 2015, with its final update being in December of that year.

The story follows the experiences of its narrator, an unnamed SAR officer working in a national forest, as he recalls stories of supernatural happenings, strange disappearances, and mysterious staircases in the middle of the woods.

The first part can be read here

In addition to the core SAR stories, Hammond also wrote several additional companion pieces that, while not always being set in the woods or featuring the main SAR officer, expand upon the lore of the world featured in the stories. These include: "The Tunnel"

All eight parts (alongside "Late Night", "Anniversary", "Molten", and "Radio") were featured on The Nosleep Podcast.

A television adaption based on ideas from the series aired as a part of Channel Zero in early 2018 under the title "Butcher's Block." Some fans were disappointed by how little it resembled the original stories.

Hammond had plans to turn the series into a novel and even created a Tumblr dedicated to tracking her progress on it. However, to allow the Channel Zero adaptation to be made, she had to sign the rights of the series over to the creators of the show. Subsequently, she lost publishing rights to her work and abandoned the book.