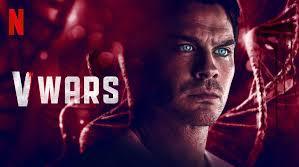 The war has begun.
Advertisement:

It follows the story of the physician-scientist Dr. Luther Swann (Somerhalder) and his best friend Michael Fayne (Holmes) as they face the evolving crisis of a deadly outbreak that fractures society into opposing factions, potentially escalating to a future war between humans and vampires. The outbreak is caused by a combination of climate change and an ancient virus that turns humans into vampires.

In the conflict, the vampire faction called Blood Nation is opposed by the elements of the government such as Calix Niklos (Outerbridge) who plots with anti-Blood senator Smythe (Atherton).

It premiered on Netflix on December 5, 2019. They announced that the show will not see another season due to mediocre reviews/ratings.