"Camp X was a highly secretive and elite international spy school during World War II. It was the first spy training facility in North America, and it was located in the last place you’d expect: on a farm near Whitby, Ontario."
— The CBC website's article on Camp X 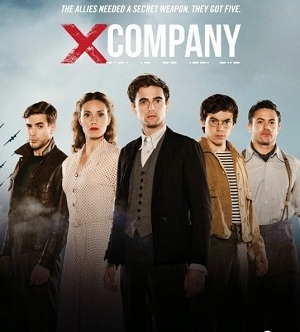 The men (and one woman) of X Company.
Advertisement:

X Company is a Canadian/Hungarian historical drama television series aired by the CBC, which aired on February 28, 2015. It is created by Mark Ellis & Stephanie Morgenstern, who were the creators of the TV series Flashpoint. Two season have aired with the third and final season airing in Canada starting in January 2017.

It is 1942 and Nazi Germany has been able to occupy most of Western Europe. Due to this, the Allied Powers have decided to make Camp X as the main base of operations for them to train various military personnel from the various Allied nations. Duncan Sinclair, an officer in the Canadian Army, is in charge of running the covert camp near Lake Ontario in Canada, which is safe from Axis retaliation. He oversees the base's operations, from training prospective recruits to handling intelligence from its agents stationed in occupied territory. Currently, Sinclair is running a covert operation with a team of Camp X-trained agents in France in order to sabotage Nazi efforts from holding onto the country.

The show can be watched from Netflix. But so far, it's available for those based in Canada. In the U.S., the first season is available on Hulu, and the show has been airing on the Ovation network.

The TV series is based on the exploits of Camp X in Allied military operations to defeat Nazi occupation in Europe.