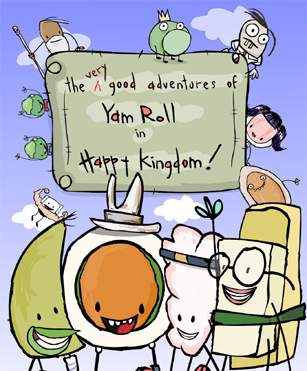 Edamame, Yam Roll, Ebi, and Tamago
"Yam Roll, are you there? You'd better not be using your special powers to have fun!"
— Katcho Miso, Yam Roll's mentor
Advertisement:

Yam Roll is a little-known Canadian animated series of 3-minute and 11-minute animated shorts chronicling, as the long title suggests, The Very Good Adventures of Yam Roll in Happy Kingdom. It was created by Jono Howard (known for writing/co-writing many episodes of Ed Eddn Eddy and later developing Numb Chucks) and Jon Izen and produced by March Entertainment, also known for Dex Hamilton: Alien Entomologist and Chilly Beach.

Happy Kingdom is a generally peaceful place inhabited by anthropomorphic Japanese food, and the titular Yam Roll (voice of Lee Tockar) is a well-meaning but reckless, cowboy-boot and -hat-wearing cab driver. His life can be a bit frustrating: his friends seem to cause more problems than they're worth, and the love of his life, the selfish spicy tuna roll Minamiko, barely knows that he exists. At the same time, he is gifted with seemingly limitless superpowers that permit him to fly and transform himself — which his teacher has strictly forbidden him from using for his own gain. There's also the occasional kingdom-ravaging monster.

The shorts were broadcasted on CBC's Kids Block on Saturday mornings, with a total of 39 shorts being produced throughout 2006. all of the episodes can be watched streaming from iLaugh.com