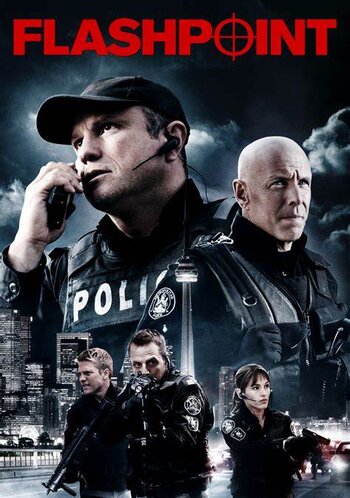 A Canadian show made by CTV about a police tactical response team in a nondescript (but clearly Toronto) city. It is co-produced by and also airs on the American network CBS, one of several shows developed as a means of getting around the most recent writers' strike (Canada is outside WGA jurisdiction). The series premiered in 2008, and after five full seasons, the series finale aired in December 2012.

Flashpoint is a show about an elite group of officers within a Canadian metropolitan police force, call the Strategic Response Unit or SRU. They're called in when the situation escalates beyond the ability of ordinary officers to handle, particularly hostage situations, armed criminals and bomb threats. Unlike a show like SWAT, the show isn't about the glamor and gunplay of the unit, but rather the personalities and conflict-resolution skills involved in running a group that has to deal with the tense situations they confront. Team leader Sergeant Greg Parker, along with veteran officer Ed Lane, lead their team in an attempt to make sure that everyone gets home alive — officers, victims, and perpetrators.

A show with a remarkable amount of emotional appeal, character development, and complex webs in each episode.

Not to be confused with the 2011 DC Comics comic, the 2013 animated adaptation of said comic or the software that allows you to play flash games.