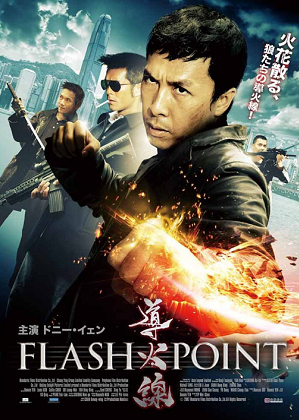 Hong Kong, 1997. A rather violence-crazy police inspector named Ma (Donnie Yen) pursues the arrest of a fraternal trio of Hong Kong gangsters led by the ruthless Tony (Collin Chou), counting on his beleaguered police partner and current mole Wilson (Louis Koo). The three brothers fail to murder a fellow gang boss, which culminates in one of them in jail, but Wilson's cover is discovered and he is blackmailed not to testify against them under the threat of killing his pregnant girlfriend. When the other witnesses are killed and Wilson is captured while trying to find her, it is up to Ma to free them and bring down the gangsters for good.

The film was a box office hit and won the Best Action Choreography awards at the 27th Hong Kong Film Awards and 2008 Golden Horse Film Awards thanks to Yen's fight choreography, which included Mixed Martial Arts and quite a few other styles in the mix.

Do not confuse with the animated film Justice League: The Flashpoint Paradox, sometimes called simply "Flashpoint".