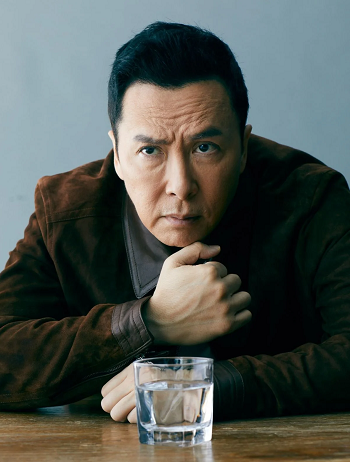 "When you watch my films, you're feeling my heart."
— Donnie Yen about his film style.
Advertisement:

Donnie Yen (born Yen Ji-Dan (甄子丹, "Zhen Zidan" in Hanyu Pinyin), 27 July 1963 in Guangzhou, China) is a Hong Kong actor, martial artist, film director and producer, action choreographer, and world wushu tournament medalist. Apart from being a well-known film and television actor in Hong Kong, Yen has also gained international recognition for appearing in many films together with other prominent and internationally-known actors such as Jackie Chan, Jet Li and Michelle Yeoh.

At a young age, under influence from his mother, Yen developed an interest in martial arts and began experimenting with various styles, especially wushu, which got him in a two-year training program with the Beijing Wushu Team. In his return to United States, he made a side-trip to Hong Kong and met action choreographer Yuen Woo-Ping there, becoming a stunt double and later actor. His first leading role, 1984's, Drunken Tai Chi got him noticed by big studios in Hong Kong, although his big breakthrough would come in 1992 with playing a baddie in the box office hit Once Upon a Time in China II, opposing his long time friend Jet Li. He also starred in cult classic The Iron Monkey. While still having a moderate film career at that point, Yen fared better in TV, starring in over 5 series, his more well known shows were The Kung Fu Master, where he played Hung Hei-gun, a major influential figure of Southern Shaolin Kung Fu, and Fist of Fury, a 30 episode adaptation of the Bruce Lee classic, as Yen is a big Bruce Lee fan.

His film career would be revived after the international success of 2002's Hero, where he would cross fists with Jet Li. However, after making well received films such as 2005's SPL: Sha Po Lang, his biggest box office success would come in 2008's Ip Man, a semi-biographical account of Yip Man (played by Yen), the wing chun master of Bruce Lee. Ip Man marked Yen's fourth collaboration with director Wilson Yip, reuniting him with his co-stars in SPL Sammo Hung and Simon Yam. Ip Man became the biggest box office hit to date which featured Yen in the leading role, grossing HK$25 million in Hong Kong and 100 million yuan in China. It would spawn a series counting four installments with Yen in the role so far, and one spinoff without him.

Apart from being an acclaimed martial artist and actor, Yen is also a world class action choreographer, and is especially notable for his violent yet technical style on screen. In recent years, Yen was successful in including Mixed Martial Arts (MMA) into his action sequences in various films, a feat most other action directors have been unsuccessful at accomplishing so far. His film Flash Point, featuring abundant MMA, was a huge success and won him the "Best Action Choreography" awards at the 27th Hong Kong Film Awards and the 2008 Golden Horse Film Awards. He also choreographed 2010 film Legend of the Fist: The Return of Chen Zhen, where he included MMA, wing chun and Jeet Kune Do elements as a tribute to Bruce Lee (who played Chen Zhen in the 1972 film Fist of Fury). Yen stated that the concept behind Bruce Lee's Jeet Kune Do is similar to that of MMA, hence its incorporation was a necessity in this film.

Next to coming from a martial art family, Yen also came from a family of musicians. His mother is a soprano, in addition to being a martial arts teacher in Boston, while his father is a violinist. Since young, he was taught by his parents to play musical instruments, including the piano. Along that, he has practised hip hop and breakdancing. Is there something out that Donnie Yen has not done?

His younger sister, Chris Yen, is also a martial artist and actress, and appeared in the 2007 film Adventures of Johnny Tao: Rock Around the Dragon.