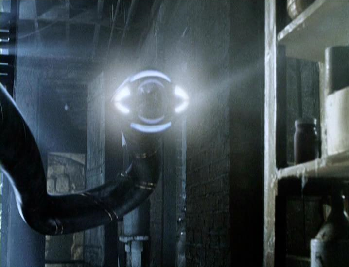 Many people find the boneless flexibility of tentacles to be a bit unnerving, and fiction often uses this to make a scene seem creepy or otherworldly. While Combat Tentacles in action sequences are perhaps the most common example of this, suspenseful scenes can better evoke the same creepiness with the slow, serpentine, methodical movements of a Sensory Tentacle in search of hiding characters.

In science fiction, a Sensory Tentacle is often a robotic probe on a tether that's deployed by Starfish Aliens, while in horror or fantasy it's usually organic and tipped with a recognizable eye. Either way, such appendages may be multifunctional as Combat Tentacles.

Sometimes combined with Bizarre Alien Senses, depending on what form of sensation the tentacles actually detect.

See also Eye on a Stalk.