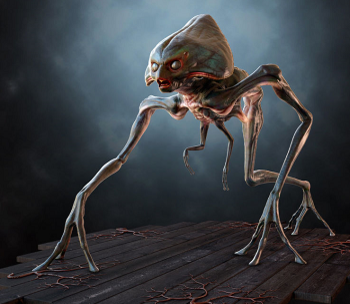 This trope is when a non-human being has an unusual type of limb that does duty as a hand or foot. Or even as other things. Tentacles, prehensile tongues, pseudopods... you name it, somebody's written about it.

Common variations include extra joints in limbs, or an odd number of limbs, usually three.

For other types of strange appendages, see Artificial Limbs, Combat Tentacles and Multi-Armed and Dangerous. Subtrope of Bizarre Alien Biology; may be a sister trope to Bizarre Alien Locomotion, if legs are involved. Supertrope to Handy Feet, Prehensile Tail, Prehensile Hair, and Multipurpose Tongue. May result in Operator Incompatibility for other species.