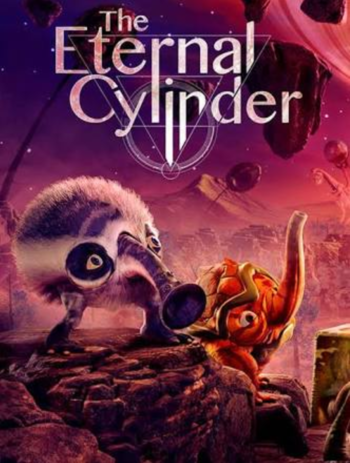 The Eternal Cylinder is a Playstation 4/Xbox/PC surreal survival game developed by ACE Team and published by Good Shepherd Entertainment.

The story takes place on a mysterious, faraway planet, where the player takes control of small, long-nosed critters called Trebhums, who must survive in a bizarre, hostile alien landscape that is being constantly destroyed by the titular Eternal Cylinder: a massive rolling structure that crushes everything in its path.

On their journey, the Trebhums must face many challenges, such as treacherous landscapes, native predatory wildlife, and mysterious cyborg abominations known only as the Servants of the Cylinder. But they're not completely helpless, as the Trebhums have one very important and beneficial trait: by consuming various foodstuffs, they can mutate their bodies into various useful adaptations, allowing them to overcome the many obstacles they face on their quest.

The Eternal Cylinder was released on September 30th, 2021, and its early gameplay trailer can be viewed here.

Its main site can be seen here.

The Eternal Cylinder contains examples of these tropes: