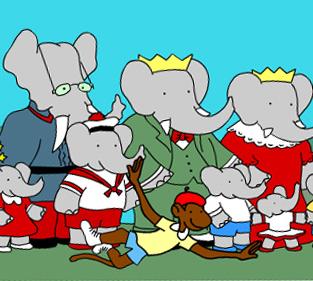 Maybe monkeys can get away with lounging on the ground, but elephants must be held to a higher standard.
I meant what I said, and I said what I meant!
An elephant's faithful, one-hundred percent!
— Horton, Horton Hatches the Egg
Advertisement:

Thanks to its size, the movements of an elephant tend to be slow and ponderous. While it's impossible to know whether an elephant's inner life is more somber and dignified than, say, that of an otter, it certainly looks that way. This impression of elephants is compounded by the fact that elephants are observed engaging in what appears to be reverence for their dead. It seems likely that they are aware of their own mortality, given that when encountering fallen members of their kind, elephants will pause and observe, to the point of picking up and inspecting loose bones they might find. The prodigious memory of elephants also makes it seem that their lives must be more burdened by history and the past than animals with less powerful memories, which exist more "in the moment".

An anthropomorphized elephant or mammoth will typically be honorable and stoic. A young elephant may be more playful, but is unlikely to be a willful troublemaker. Ironically, while in Real Life female elephants tend to be the most involved in the complex social behaviors which make them so easily identified-with, fictitious elephantine heroes tend to be males — perhaps because something so massive and thick-skinned as an elephant seems masculine even when the beast is female.

Some aspects of Real Life elephants, such as their excellent memories, may be portrayed widely in fiction, while other aspects, such as the feeling of Unstoppable Rage and lust males feel during musth, may be played down. Except in the case they encounter dirty rats.

Compare Genial Giraffe, another friendly animal that is often seen together with elephants. The polar opposite of the Cruel Elephant.