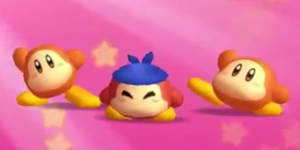 You get one guess at which one is the main character's best friend.
Advertisement:

Riddle me this: When is a Faceless Goon not a faceless goon? This trope is about characters who look similar to the resident Redshirts, Mooks, Henchmen Race or other such group of hard-to-distinguish characters, but have some characteristic which makes them easy to pick out. This can be as simple as giving them the same outfit minus a mask or nice hat, but there are other alternatives (e.g., one of the identical-looking Rubber Forehead Aliens who's picked up a Rugged Scar, or a Mecha-Mook with a fancy paintjob).

This can come in two flavours depending on the exact effect the exception has:

Sister trope to Identical Twin ID Tag (who all get a unique look out of the deal), Odd Name Out (where something similar is done with names), King Mook (when they're distinguished because they're more powerful), and Mauve Shirt (another "generic" character who gets a bit more development). Subtrope of Distinctive Appearances (any instance of using appearance to show individuality). Supertrope to Custom Uniform. Contrast Nonuniform Uniform (where everyone in the group looks at least slightly different), Unique Enemy (which lacks any comparable mooks), Group-Identifying Feature (where members of a group have one distinguishing feature), and Underground Monkey (where a slight variation is itself another group of mooks).

Answer: When he has a face?