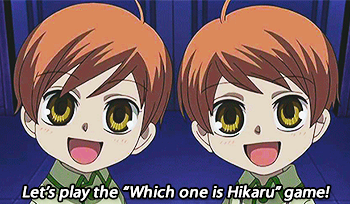 Many have tried and many have failed.
Stories featuring twins (who are almost always identical) will often ask the question: what differentiates these two outwardly identical people, and can others (in-universe) pick up on those differences? To answer, creators will sometimes have their characters administer the twin test.
Advertisement:

The twin test is a quiz in which identical siblings ask other characters to point out which sibling is which. This can be done in a variety of ways, most commonly with the twins asking someone to identify them either face-to-face or using photos.

The twin test is often Played for Laughs, especially with Trickster Twins. If someone is particularly good at the test, the siblings may become obsessed with stumping them, escalating the difficulty of the test to absurd levels by dressing the same, adopting similar mannerisms, or even pretending to be the other twin. Single-Minded Twins giving a twin test are typically played for laughs with the joke being that the obvious lack of distinct personalities between the two will make answering correctly a matter of chance. The justifications a character gives for their answer, regardless of whether they were right or wrong, are ripe with comedic potential.

When Played for Drama, if most people fail the test, at least one of the siblings may become withdrawn or jaded about the nature of their own individuality. It may also jump-start a desire for one sibling to differentiate themselves as much as possible from the other and distancing themself from their sibling(s) in the process. Expect someone who consistently passes to be considered a True Companion or One True Love, since only someone who really gets the siblings can pass the test.

If siblings have Identical Twin ID Tag or experienced Twin Desynch, they are far less likely to give a twin test since the answer would be obvious (though savvy twins can exploit this). In more fantastical or action-oriented stories that include an Evil Twin, a twin test may be used to confuse or thwart The Hero and is likely to include raising the stakes of answering incorrectly into a Matter of Life and Death.

Compare and contrast Spot the Imposter and Imposter-Exposing Test, which similarly focuses on a character correctly identifying another from a doppleganger. What separates this trope from those is that while the twin test can include one sibling pretending to be another, this is not fundamental and typically the twins present genuine representations of themselves. Similarly, in the case of split personalities, a twin test may involve Hyde Plays Jekyll, but it is not necessary for the trope.

See also Twin Switch and Identical Twin Mistake. Making Use of the Twin can sometimes serve as a Real Life version of this trope for viewers.