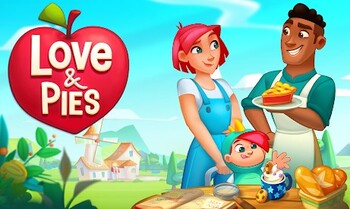 Love & Pies is a mobile merge game by Trailmix Ltd. released on September 2021. The game involves merging items to fulfill customer orders, which gives coins to be used to progress the game's story.
Advertisement:

Amelia Green is a single mother who arrives with her daughter Kate back at her mother Freya's restaurant, the Windmill Cafe, only to find it has been burned down, and her mother is missing. While trying to discover the culprit behind the arson attack, she uncovers even more mysteries, including that of a mysterious thief known as The Purple Fox, who leaves behind a purple fox figurine at the scene of the crime.