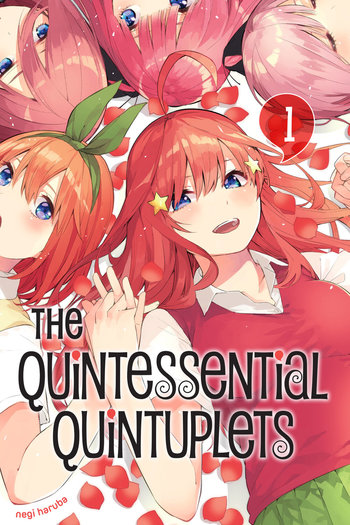 Clockwise from center, from youngest to eldest: Itsuki, Yotsuba, Miku, Nino, Ichika.
"Our mom often told us, that if one of us screwed up then all five of us would overcome it. If one of us was happy then all five of us would share in it.
Same with Joy, Sadness, Anger, and Love.
All of it would be split into five equal parts among us."
Advertisement:

Fuutarou Uesugi is a poor, antisocial ace student, who one day meets rich transfer student Itsuki Nakano. They get on each other's nerves, and part ways on bad terms. But then, Fuutarou gets assigned a tutoring job that pays five times the usual amount, which he eagerly accepts, to provide for his debt-ridden family. Realizing that his student-to-be is Itsuki, he immediately goes about trying to patch things up between them. While undertaking this task, he meets four other girls: Ichika, Nino, Miku and Yotsuba, later revealed to be Itsuki's quintuplet sisters, and learns that his true task is to tutor all five of them and make sure their flunking grades improve and carry them on to graduation, despite their initial discontent with him and complete lack of interest in studying.

Meanwhile, in a Flash Forward to a few years later, Fuutarou is bound to marry one of the Nakano sisters. But with all five sisters falling for him through his tutoring, which one of them will be his bride?

The Quintessential Quintuplets (original Japanese title: Go-Toubun no Hanayome, literally meaning "A Bride in Five Equal Parts") is a manga series by Haruba Negi, serialized in Weekly Shōnen Magazine from 2017 to February 2020 with a total of 122 chapters published in 14 volumes. It was then licensed by Kodansha USA for a North American release, with the first volume coming in June 2018.

The manga received an anime adaptation in the Winter 2019 season, with animation by Tezuka Productions. A second season was announced

shortly after the first ended, though now it's been taken over by Bibury Animation studies. It aired from January 8 to March 25, 2021. A sequel was announced

shortly after the end of the second season, later confirmed to be a movie

Characters from the series appeared in a collaboration event in the mobile game Venus 11 Vivid!! from May 25 to May 31, 2019. A mobile game based on the series titled: The Quintessential Quintuplets: The Quintuplets Can’t Divide the Puzzle Into Five Equal Parts was released in 2020. A visual novel titled Gotoubun no Hanayome ∬: Natsu no Omoide mo Gotoubun was developed by Mages for the PlayStation 4 and Nintendo Switch consoles, and was released on March 25, 2021 in Japan. Another videogame based on the movie titled Eiga Gotoubun no Hanayome ~Kimi to Sugoshita Itsutsu no Omoide is set to be launched on June 2, 2022.

Compare We Never Learn, a Weekly Shonen Jump manga that started the same year and shares a similar premise, though a major difference is that the five girls aren't sisters.

The Quintessential Quintuplets provides examples of:

Example of:
Trash of the Titans