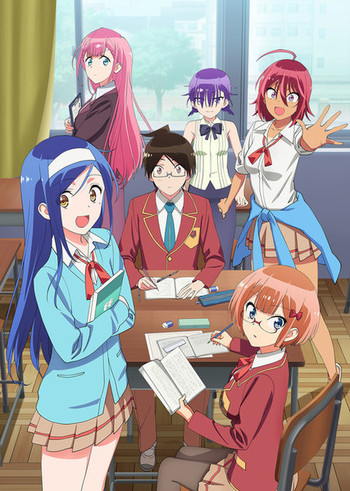 Nariyuki Yuiga is one of the brightest twelfth-graders at Ichinose Academy. Having come from an impoverished family, he strives to achieve the school's "Special VIP Recommendation" scholarship, which will fully cover his college tuition and thus help provide for his widowed mother and his three younger siblings.

He eventually gets shortlisted for the scholarship, albeit under the condition that he tutor the two brightest girls of his batch, Rizu Ogata and Fumino Furuhashi, and help them qualify for their college degree of choice. That soon proves to be easier said than done, given that Rizu, a prodigy in mathematics and science, wants to pursue psychology, and Fumino, an expert at the arts and literature, would rather be an astronomer, despite being hopelessly weak in either literature and math, respectively.

Now Nariyuki has his hands full with trying to achieve his dreams, as well as guiding Rizu and Fumino, as well as his childhood friend Uruka Takemoto, Ichinose's top swimmer who sorely needs to improve her grades (especially English) to earn an athletics scholarship, to theirs. Joining along for the ride is their college-age upperclassman Asumi Kominaki, who needed good grades in science to be able to enter a medical school and thus be able to help at her family-run clinic, and Mafuyu Kirisu, Rizu and Fumino's stern former tutor.

We Never Learn (ぼくたちは勉強ができない, Bokutachi wa Benkyou ga Dekinai, or Bokuben for short) is a romantic comedy manga written and illustrated by Taishi Tsutsui, which was serialized in Weekly Shonen Jump from 2017 to 2020 and collected into 21 volumes.

The manga received an anime adaptation directed by Yoshiaki Iwasaki for Studio Silver and Arvo Animation in 2019, with the first season airing in winter and the second and final season airing in fall.

Compare The Quintessential Quintuplets, a Weekly Shōnen Magazine manga that started the same year and shares a similar premise, with a major difference being that the five girls are identical quintuplet sisters.

We Never Learn provides examples of: