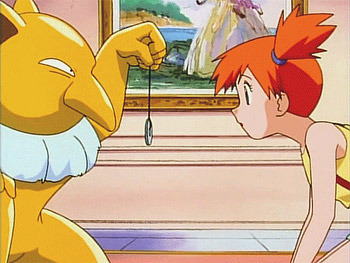 "You are getting very sleepy...when I snap my fingers you'll find Ash and kick him in the 'nads."
Advertisement:

Often, a pocket watch (or another object of that sort) is swung back and forth like a pendulum in front of a victim repeatedly to hypnotize them. This is almost always accompanied by the hypnotist saying "You are getting very sleepy..." or some variation.

Truth in Television: Since these kind of motions are rather hypnotic in Real Life, this trope somewhat makes sense.

See also More Hypnotizable Than He Thinks, Hypno Fool, Hypnotic Eyes, and Trigger Phrase. Not to be confused with Hypno Trinket, which is something the subject/victim wears, or Mind-Control Device, which is a device that has the sole purpose of hypnotizing someone/controlling someone's mind. Could be used to Hypnotize the Captive, or (very rarely) for Mass Hypnosis.

Lincoln tries to convince himself this odd entree of Dad's tastes like ice cream.

Lincoln tries to convince himself this odd entree of Dad's tastes like ice cream.