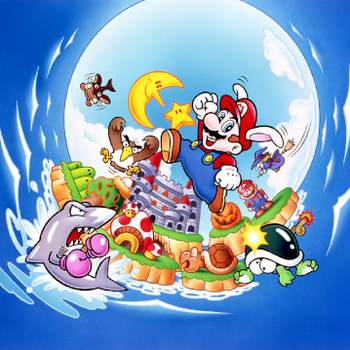 Since when did [Mario] have a castle at all?
"Obey Wario! Destroy Mario!"
— Wario, USA Commercial

The sequel to Super Mario Land, this game is the First Appearance of The Rival, Wario, and one of the few times Wario is an outright Big Bad instead of just being extremely greedy. It was originally released in the last quarter of 1992, and is the seventh entry in the Super Mario Bros. series. The plot is that Wario took over Mario's castle and land while Mario was rescuing Daisy in the first game. Mario needs to find the eponymous six golden coins to get into the castle and stop Wario. Interestingly, one of the golden coins has been entrusted to Tatanga, the perpetrator of Daisy's kidnapping.

Whereas Super Mario Land was essentially a handheld version of the original 1985 Super Mario Bros., the sequel took most of its cues from Super Mario Bros. 3 and Super Mario World instead, including a nonlinear world map and a new, gravity-defying power-up (Carrot) that serves as the game's signature power-up (thus following up the Raccoon Leaf and Cape from previous games). This game swapped the small sprites of the previous game, and had much more detailed graphics (although still smaller than NES sprites due to the Game Boy's smaller resolution).

Wario, Mario's arch-nemesis, trÃ­es to hypnotize the commercial viewer into joining him against Mario.

Wario, Mario's arch-nemesis, trÃ­es to hypnotize the commercial viewer into joining him against Mario.