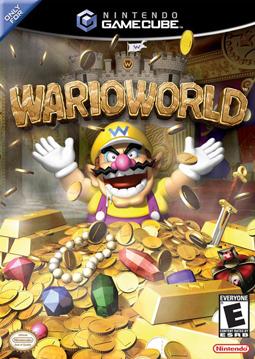 Hey! Don't look! This is my treasure! MINE!
"I'm-a number one!"
— One of Wario's several taunts in the game
Advertisement:

Wario World is a 3-D platforming game for the Nintendo GameCube starring Wario. It was developed by Treasure. Although Wario World is technically not an entry in the Wario Land series, its plot (and gameplay, to a lesser extent) has the same fuel: Wario's endless greed.

The plot is as follows: Wario steals a black jewel that had been sealed away a long time ago by a group of small, elf-like creatures called Spritelings. However, it turns out that the black jewel is evil, and thus, chaos ensues. The black jewel proceeds to destroy Wario's castle, create his own bizarre, warped world in its place, turn Wario's treasure into monsters, and imprison the Spritelings inside boxes. It's up to Wario to rescue the Spritelings, get his treasure back, and destroy the evil black jewel once and for all.

The main objective of each level is to collect red diamonds, which are located inside underground puzzle rooms spread throughout the level. Once Wario has enough red diamonds, he can remove the Stone Doohickeynote Yes, that is their real name. sitting atop the door to the level's boss. After beating the boss, Wario can move on to the next level.

There are four worlds, all of which consist of two levels and a world boss. When Wario clears a world, he gets a key. After getting all four keys, he can open the chest in which the Black Jewel sleeps.

That's it! That's the stuff! Now, that's the kind of place a guy like me deserves!!!