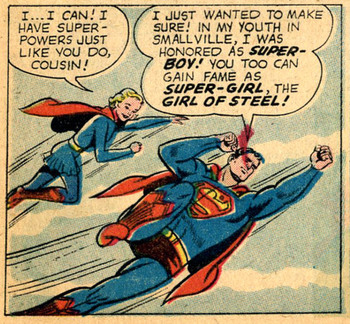 Or the Maid of Might. Or the Last Daughter of Krypton. Or the Blonde Blockbuster. Or... you get the idea.
Look! Up in the sky! Not a bird, not a plane, it's Troperman! Also known as the Trope Knight, and your friendly neighborhood Lampshade Hanger!
Advertisement:

Descriptive nicknames given to a character. This gets used a good bit for superheroes. Superman, the Man of Steel, for example. Because, we suppose, it is hard to squeeze all the required coolness into just one name. Stuffy literature majors refer to these as epithets.

If the nickname is just the hero's name with a descriptor in front of it, that's Sister Trope The Adjectival Superhero. See also: Red Baron.

In Film Adaptations, many of these may be exempt from the Comic-Book Movies Don't Use Codenames clause, due to the fact that they're used more as a title than a "name".