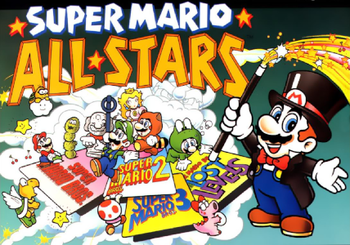 Super Mario All-Stars + Super Mario World (1994) has those four games and Super Mario World. As World is already a SNES game, this version only adds a few tweaks, particularly new sprites for Luigi. It was not released in Japan, and was only available in western regions bundled with the console as the Super NES Mario set.

For those players who missed the NES era, Super Mario All-Stars became their introduction to the four classic games. The 8-bit graphics and sound were updated to 16-bit quality. It is not for purist players, but the gameplay remains almost exactly as in the original games. Elements of the Super Mario Bros. 2 and Super Mario Bros. 3 remakes were later used to create the first and last entries in the Super Mario Advance series of remakes.

For 2010, Nintendo released Super Mario All-Stars again, as a Wii disc, to mark the 25th anniversary of Super Mario Bros. (1985). This version uses emulation to run the SNES game in the Wii. To justify this as a Wii disc and not a Virtual Console download, Nintendo put a few Feelies in the boxed set. This one is playable with just the Wii Remote, though the option to play with a Classic Controller or Nintendo GameCube controller is available. Additionally, the game was made available for the Nintendo Switch Online service on September 3, 2020.