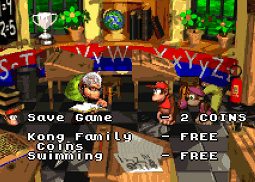 "Want to save your game? Then learn to save your money first."
"There are people who say that preventing saves adds to the "tension" of the game. Sure, in the sense that the fact that your 360 could catch on fire at any moment also adds to the tension."
— "The 7 Commandments All Video Games Should Obey,"

Please do not switch off the system or remove your memory card while Describing Save Point Here.

Video Games often place rules on when, how and where the player can save their progress in-game. Some of these were originally due to technical limitations of the hardware the games ran on, but with modern consoles having vast reserves of memory and storage space, these limitations are more because of tradition than anything else.

On the flipside, an unrestricted ability to save one's game literally anywhere can (as players using save states on emulators can attest to) leave the player stranded in an Unwinnable condition should they choose to save at the wrong time (...unless you have more than one savefile) and placing limits on the player's ability to save can prevent this, making it a double-edged sword. Properly spaced Save Points can also serve as useful hints about when the player should save.

There's also Export Save, for when the game lets the player make a backup save, presumably outside of its regular save mechanics, and transfer them from device to device at need.

There are a wide variety of ways these can occur. Variations include:

Compare Checkpoint Starvation, for when a level (or entire game) has very few, if any, Check Points or Save Points.

open/close all folders
Other Resource Cost to Save
Multiple campaigns / characters at once, but One Save File Per Campaign/Character
Save Only at Hub
Broad Strokes Save
Other / Multiple / Not Yet Sorted
Non-Video Game Examples