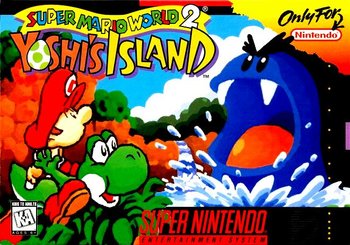 The history of a legend. We call it that because Yoshi's a trooper for putting up with that crying.
Advertisement:

The game was released in Japan on August 5, 1995, and in North America two months later on October 4. A sequel, Yoshi's Island DS was released on November 13, 2006.

The story is set before the original Super Mario Bros. Kamek,note The name all Magikoopas are known by in Japan who is at the time young Bowser's caretaker, looks into the future and sees the fate of his young master. To prevent this, he blindsides the delivery stork as it's carrying the Mario Bros. to their parents but only snags Luigi, dropping Mario over Yoshi's Island and right on the back of one of the dinosaurs. Seeing the map that was bundled with the baby Mario, the Yoshis decided to work together in a relay style fashion to rescue Luigi, all the while dodging Kamek's troops who are searching for Mario.

Gameplay-wise, it shares much in common with its parent series and it even has many of the common Mario enemies. The game introduced Yoshi's egg-throwing ability as well as the Ground Pound attack (an attack that would be given to Mario himself in the 3D games and the New Super Mario Bros. series). One difference, however, is that Yoshi doesn't have the traditional Breakable Power-Up or Hit Points; instead, every time Yoshi is hit, Mario flies off Yoshi's back and a timer counts down. The player must retrieve the screaming baby before the countdown reaches zero, otherwise he'll get kidnapped and Yoshi loses a life. The number of seconds on the countdown can be increased by collecting stars.

In the fall of 2002, the game was given an enhanced port for the Game Boy Advance, known as Yoshi's Island: Super Mario Advance 3. The port includes 6 new difficult Bonus Levels called the Secret Levels that are unlocked after beating the game, changes some of Extra Levels, and has a number of other minor adjustments such as lightening the color palette. This version was later one of the ten Game Boy Advance games available to participants in the Nintendo 3DS Ambassador Program, given a limited release to early adopters of the Nintendo 3DS for free on its eShop in December 2011. The original game was also later made available on the Nintendo Switch as part of the Super Nintendo library for Nintendo Switch Online.

Eugh. Sure is little wonder Nintendo NEVER has commercials like these anymore!

Example of:
"Pop!" Goes the Human

Eugh. Sure is little wonder Nintendo NEVER has commercials like these anymore!