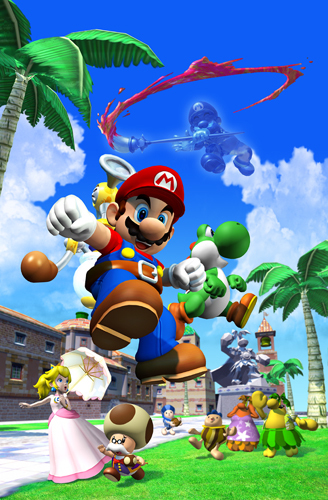 Pollution and paradise don't mix.
"On a tropical island far from the Mushroom Kingdom, among a people enchanted by sunshine, Mario has taken a break from the hopping, the bopping, and saving the princess to take a well deserved vacation... or so he thinks."
— E3 2002 trailer

Everyone's favorite plucky plumber, Princess Peach, five Toads (Red, Green, Yellow, Blue, and Purple) and Toadsworth go on a vacation. When they arrive at scenic Isle Delfino, they find that the place has been polluted and plastered with graffiti. Additionally, the Shine Sprites that power the island have disappeared. The culprit is a guy who looks suspiciously like Mario. Everyone's favorite plumber is promptly arrested as he arrives, falsely accused of vandalizing the island. He is put on trial, found guilty, and is ordered to clean up the graffiti and recover the Shine Sprites; but fortunately, to help with the cleaning, Mario uses a water cannon/jetpack contraption called FLUDD. Wacky hijinks ensue, Peach gets kidnapped yet again, Bowser turns out to be behind it all, and he now has a son to boot.

Notably features full voice-acted dialogue for all the main characters except Mario. Subsequent games in the main series have returned to dialogue boxes, along with voiced sound effects. Overall, this was the 3D Mario to break away from the "Mario formula" the most; tellingly, classic enemies like the Goombas and regular Koopa Troopas are nowhere to be found, and since it all takes place on a tropical island, Mario's nowhere near the Mushroom Kingdom.

Down With Petey Piranha

Petey Piranha is a notable member of the Piranha Plant species, but instead of eating creatures, it vomits gunk. Other occasions, however, show that it isn't above ingesting creatures.

Down With Petey Piranha

Petey Piranha is a notable member of the Piranha Plant species, but instead of eating creatures, it vomits gunk. Other occasions, however, show that it isn't above ingesting creatures.