Guilty Until Someone Else Is Guilty 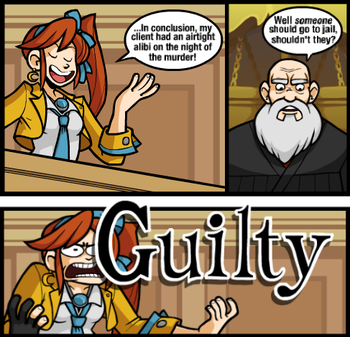 "While it was ridiculous to think that Walter's freedom depended on the arrest of someone else ... people would think he'd gotten away with murder until the actual killer was identified. We had long ago concluded that finding the real murderer might be the most effective way to free Walter."
— Bryan Stevenson, Just Mercy (the book)
Advertisement:

A misdeed has occurred, and one character - usually a protagonist - is assumed to be the culprit, either because they have a history of being a troublemaker, or simply because they were the first to find the body - the second person on the scene of the crime saw them standing next to the victim and naturally assumed that they did it. The problem is that the accused character is innocent. While the character's closest friends and relatives may believe their innocence, everyone else will believe they're guilty. The "evidence" can sometimes be wafer thin and lacking coherence, such as a motive. Arguments in their defense tend to be ignored - the other characters will still believe they did it. The only way everyone will be convinced that the accused isn't guilty is with the strongest evidence of all: exposing the true culprit.

And yet this is not a Kangaroo Court - the court simply follows its own inscrutable train of thought, and will clear your name once it becomes apparent that the prosecution was trying to frame you. It's just that the standards for proof are apparently - and hopefully - very different from real life.

Exaggerated examples of this trope ("You've presented an iron-clad alibi proving Bob couldn't possibly have committed the crime. But unless you find the actual perpetrator for us, we're gonna convict Bob anyway.") are also examples of the logical fallacy Shifting the Burden of Proof. Clear My Name, Clear Their Name, and The Perry Mason Method frequently overlap with this. Compare Not Me This Time. Compare Suspect Existence Failure, which is another trope that uses bulletproof evidence for a suspect's innocence.

Due to the nature of this trope, every single example contains spoilers, so all of them will be unmarked. You Have Been Warned.