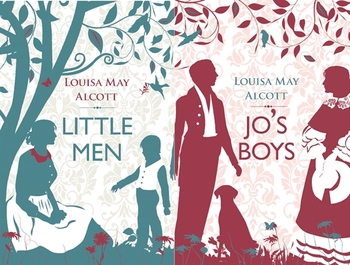 The sequel to Little Women, Little Men, takes place at Plumfield, which the now married Jo and Fritz have turned into an orphanage/school for young boys, based not-so-subtly on Bronson Alcott's then-controversial educational theories.

We are introduced to Jo's sons, Rob and Ted; Laurie and Amy's daughter Bess, the Brooke twins Daisy and Demi (a clever way of avoiding Margaret and John Jr.), their baby sister Josie; and Professor Bhaer's orphaned nephews Franz and Emil. Also on hand are a mixed assortment of other Aesop-appropriate youngsters, the foremost being gentle ex-street violinist Nat; his best friend the wild and surly Dan; Daisy's tomboyish friend Annie, called "Nan" and the happy-go-lucky Tommy.

Following up Little Men ten years later is Jo's Boys, and How They Turned Out: A Sequel to "Little Men". Plumfield has grown into a mixed college (a rare phenomenon at the time) and we rejoin these beloved characters as young adults, plagued by an epidemic of romance and broken hearts amidst chasing dreams and choosing careers before the final curtain falls forever on the stage of the March family.