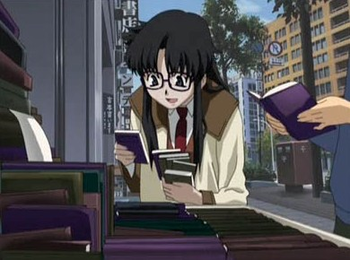 Yomiko Readman picks up some light reading.
"To me, the poems in the books my mother had inherited were an escape: They spoke of wilder worlds than any comic book or movie could evoke. They seemed to burn with color."
— Frank Castle, The Punisher: The Tyger
Advertisement:

A character who just loves to read books. Can be smart or just of average intelligence, may or may not wear glasses, and possibly have few interests other than reading. Expect them to put off doing stuff with friends in order to read sometimes, or for them to have few friends because they make a point to ignore or avoid others for the purpose of sitting down in a secluded area and indulging in their hobby of reading.

Possesses the Charles Atlas Superpower of being able to not only read and walk at the same time but to read and navigate through a maze of disaster and mayhem (car wrecks, floods, runaway rabid dogs, the debris of a Chase Scene such as a flying Fruit Cart, falling meteors) without a scratch. The character will also likely possess Encyclopaedic Knowledge thanks to reading anything and everything.

This is often very Truth in Television. You yourself probably knew at least one. Or are one. Technology is marching on, with smartphones and tablets being used more and more for distribution, and libraries and bookstores becoming rarer entities, we will see if in the future these people use physical paper books in Real Life.

Not to be confused with a game of the same name.

Often the victim of a Useful Book gag but, sadly, not of a Portal Book plot.