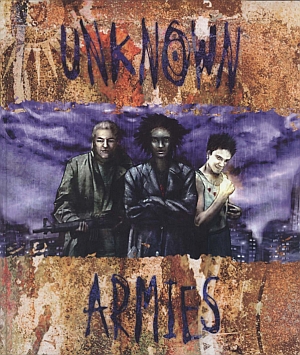 "You did it!"
Advertisement:

Unknown Armies (abbreviated UA) is an occult-themed Role-Playing Game by John Tynes and Greg Stolze and published by Atlas Games. Subtitled "A roleplaying game of power and consequences".

The game is divided into three levels: street, global, and cosmic. At the street level, you know only this: there is something very weird happening, and you've had a glimpse of it. Now you're about to find out just how strange the world really is. Only at the global level do you learn the truth: magick is real, it's postmodern, and it's everywhere.

The world you know is only the surface. The Occult Underground swarms beneath it like a nest of bugs. Adepts alter reality with the power of their own obsessions and madness. Avatars gain the favor of the cosmos by playing their part in the collective unconscious. Those without magick hunt down those with for their own purposes—to control, to suppress, or to assimilate. Sounds pretty interesting, right? There's a catch. There's always a catch. All labor in secret for fear of the sleeping tiger—magick may be powerful, but all the forces of the arcane aren't worth much compared to the panicked masses on a witch hunt. Further, magick power is bought at a steep price. You can alter human flesh only by scouring your own. You can gain the strength of the archetypal Warrior only by never relenting, even when tact or sanity say you should back down. You can bring about anything with magick—provided you're willing to sacrifice what it takes to do so.

Why risk so much of yourself for impressive but seemingly minor power? You'll need to reach the cosmic level to find out...

This is a fantastic and extremely gritty roleplaying game. Combat is brutal and bloody—the combat chapter opens up by describing several ways to get out of a fight, since more often than not you're gonna get torn the hell up if you're not careful, or even if you are. The rules are light, but clever and flavorful, with fancy dice tricks adding spice to the usual d% system. The powers of magick are even more flavorful, bizarre, and amazing. The setting is imaginative, detailed, and engrossing.

starring several of the Non Player Characters from the game books as they converge on a small town in the midwest and completely mess up it, themselves, and each other. If you'd like an idea of what it's like to play in a global/cosmic game of UA, Godwalker is a good place to start, and it only costs $3.33 in Kindle format.

The game is often compared to Over the Edge, due to both games featuring an abundance of surface level weirdness and protagonist empowerment, along with a do-it-yourself skills list. Both Tynes and Stolze also were writers for Delta Green, with Tynes begin one of the original writers creating the first Delta Green scenario ever, Convergence, and Stolze would write for the 2016 edition. Some level of influence can be seen from Delta Green to Unknown Armies and vice-versa: A hidden occult world, gritty and grim ambience, destructive magic and with the 2016 edition of Delta Green, a level of Personal Horror with its own Sanity Meter adapted from Unknown Armies.

There also was a successful Kickstarter for Third Edition

, with an unedited beta text for a post 9/11 world available to backers.

Warning: many of these examples contain severe spoilers for those playing Street-level campaigns!