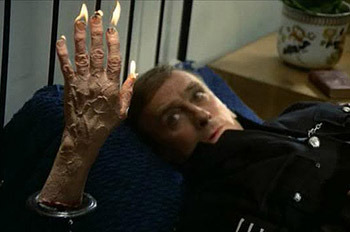 High five?
"I found a mummified hand in her room."
"The 'Hand of Glory.' It was supposed to be able to open any lock. It was the right hand of a convicted murderer, cut off while his neck was still in the noose. It's supposed to open any lock... Or so Margaret believed."
— Harry Angel and Ethan Krusmark, Angel Heart
Advertisement:

A Hand of Glory is a preserved severed hand that can serve as a source of light, either due to its holding a candle (often one made from human tallow) or because each finger has been made into an individual candle. The Hand was often said to have belonged to a hanged man – either his left hand or, if the man was a murderer, the hand that did the deed. Another source is the arm of an unborn child.

The Hand is variously ascribed a number of magical abilities that it is supposed to produce whilst the wick stays lit, generally any power that would be of use to a sneaky thief, including providing a light that only the wielder can see, unlocking any door it comes across, or sending anyone into a household or who looks into the flame to sleep or paralyzing them. Generally an artifact of Black Magic, seen as something that no respectable Gentleman Wizard would own, use, or even want to touch.

Unfortunately, Borgin's sucking up falls flat when Lucius Malfoy points out that he hopes his son will amount to more than a sneak-thief.