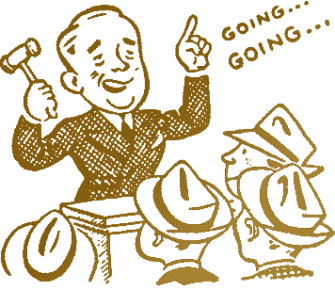 Auctioneer: The man who proclaims with a hammer that he has picked a pocket with his tongue.
— The Devil's Dictionary
Advertisement:

Next up, Ladies and Gentlemen, is this lovely trope about putting items up for sale. Not at a fixed price, but allowing people to put their own price on the item, as long as it's higher than the last price named. These are called bids.

It can be used for your basic comedies, dramas, thrillers and all situations with a need for tension (and a Motor Mouth), ladies and gentlemen. You can get your MacGuffins being fought over with good guys and bad guys trying to out bid each other. For a limited time only, get this with the random civilian who starts bidding unaware of what they've got before them thus messing up everyone's plans. Perhaps you just need a straight forward plot device to get you item from A to B? Well this is what you need. It makes a great laundering system for spy secrets and mafia money. You might think this bidding system is just for getting the item, it can be used as a sting wherein the heroes drive up the bargain to find out who the villain (who desperately needs it) really is.

As with all models in this range, you'll be getting the opportunity to signify wealth and opulence like you'll rarely find elsewhere. Somedays you'll just find yourself taking a character to the auction just to spend exorbitant amounts of money on random pieces to signify how wealthy they are. Expect the audience to gasp as mister moneybags raises the bids to an unprecedented level.

Oh no, this isn't just an ordinary trope, everyone. It's a Super-Trope, encompassing:

Shall I start the bidding at 20? Thank you.

Mario has to pay for the Shell Stone, first going 10k coins, then 5k, then 3k, then 2k, then 500, and finally 300 before the Koopas finally buy it themselves.

Mario has to pay for the Shell Stone, first going 10k coins, then 5k, then 3k, then 2k, then 500, and finally 300 before the Koopas finally buy it themselves.