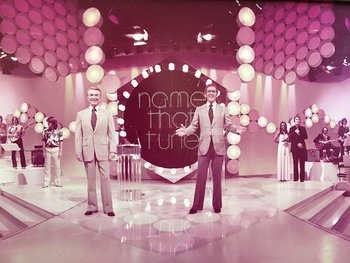 The $100,000 Name That Tune version (1974–81). Center: producer Ralph Edwards and host Tom Kennedy. Left: featured singer Steve March. Right: featured singer Monica Burris and orchestra leader Stan Worth.
Game Show created by Harry Salter in which contestants competed to identify a popular tune from a few notes. The series had many incarnations over the years, and from 1976-85 was known as The $100,000 Name That Tune after its top prize.
Advertisement:

Red Benson was the original host from 1952, replaced by Bill Cullen in 1954. Cullen was replaced in 1955 by George DeWitt, who hosted until the end of the run in 1959. Tom Kennedy hosted a nighttime version from 1974 to 1981. Jim Lange helmed a 1984-85 revival (produced by Sandy Frank, who had distributed the Kennedy run; yes, that Sandy Frank).

Notably, Tune was very rare among game shows in that its seven-year syndicated run flourished in comparison to a pair of concurrent daytime runs on NBC; Dennis James hosted the first one from 1974 to 1975 (which began prior to the nighttime debut), and Kennedy hosted a short-lived one in 1977.

After several failed attempts at a revival, Fox acquired a new primetime version in November 2020 for a January 2021 premiere, hosted by Jane Krakowski with a $100,000 grand prize, and unusually filmed in Australia. It was renewed for a second season, which moved to Ireland.