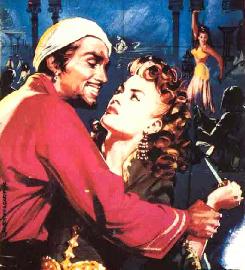 "O Masters, O Noble Persons, O Brothers, know you that in the time of the Caliph Harun-Al-Rashid, there lived on the golden shore of Persia a man of adventure called Sinbad the Sailor. Strange and wondrous were the tales told of him and his voyages. But who, shall we surmise, gave him his immortality? Who, more than all other sons of Allah, spread glory to the name of Sinbad? Who else, O Brother, but — Sinbad the Sailor! Know me, O Brothers, for the truth of my words, and by the ears of the Prophet, every word I have spoken is truth!"
Advertisement:

Sinbad the Sailor is a 1947 Technicolor fantasy-swashbuckler film from RKO, directed by Richard Wallace, and starring Douglas Fairbanks Jr., Maureen O'Hara, Anthony Quinn, and Walter Slezak. It tells the tale of the "eighth" voyage of Sinbad the Sailor, wherein he discovers the lost treasure of Alexander the Great.

The film is notable for its lavish production values, including detailed paintings and models, and for its florid pseudo-Arabian dialogue. Fairbanks makes an over the top and highly acrobatic Sinbad and he looks very fine in his chest-baring shirts and poofy pants. Maureen O'Hara's Shireen is a fine addition to her gallery of haughty princesses and sword-wielding pirates, while Anthony Quinn's Emir Maffi of Daibul is a coldly menacing butcher. George Tobias's Abbu and Walter Slezak's Melik are quirkily amusing. The lush Romantic Hollywood-Arabian score is by Roy Webb.

Accompanied by his faithful and perennially panicked sidekick Abbu (George Tobias), Sinbad (Douglas Fairbanks, Jr.) salvages a luxuriously appointed ship called the Prince Ahmed, whose crew have all expired under decidedly questionable circumstances. On board Sinbad finds a stained glass window that exactly matches a medallion he has worn all his life and jumps to the conclusion that he is Prince Ahmed. "Are you sure?" Abbu asks. Sinbad isn't, but doesn't plan to letting that stop him from finding and claiming the treasure of Alexander the Great hidden on the island of Daryabar.
Unluckily for our hero he loses his new ship when he is unable to pay the docking fees at Basra. Tricky as ever, Sinbad does his best to frighten off the prospective bidders with tales of a curse. But one, a beautiful veiled woman (Maureen O'Hara), refuses to be frightened. She is Shireen, a princess of the Kurds who is clearly in the market for a rich and powerful husband. Her main prospect is the Emir of Daibul (Anthony Quinn), but she isn't averse to a better offer and takes rather a shine to 'Prince Ahmed'.
She tells Sinbad about the mysterious Jamal, an elusive and deadly figure also seeking the treasure of Daryabar, and that her Emir is interested as well. Sinbad acquires a new crew, including an additional comic relief Melik, an incompetent barber (Walter Slezak). Sailing to Daibul in search of the chart to the island, which he thinks is in Shireen's possession, Sinbad successfully penetrates the harem but, after a spectacular chase, is captured by the guards. Fortunately the Emir thinks "Prince Ahmed" has the chart and is all charm in an attempt to get it. Sinbad uses a magic trick to escape, carrying Shireen off with him. Back aboard the Prince Ahmed he discovers she does NOT have the chart and she discovers that not only doesn't he have it, but he isn't Prince Ahmed at all but Sinbad the Sailor — who, as it happens, has always impressed the heck out of her.
Melik the barber then reveals that he has seen the chart and memorized it — at the price of an all but broken head. They sail for Daryabar only to be overtaken and captured by the angry Emir. Jamal then reveals himself as a member of Sinbad's crew. A Mexican Standoff ensues; Jamal has the knowledge, Sinbad is presumably 'Prince Ahmed' and the Emir has his soldiers. It is resolved by a reluctant partnership in which each man schemes against the other two.
Daryabar turns out to be a dreadful place, a barren island surrounded by wrecked ships, but in its center stands a beautiful palace inhabited only by a old man, the Aga (Alan Napier) and a single servant. A sudden attack of conscience causes Sinbad to proclaim his true identity and warn the Aga not to give up his treasure but the gold means nothing to the old man and he calmly reveals the treasure overflowing from the vaults below in the basin of a fountain. Jamal and the Emir promptly turn on each other, giving the Aga an opportunity to rescue Sinbad — who really is his son — and Shireen. Together they retake the ship and kill the Emir with Greek Fire.
Presumably Sinbad and Shireen live happily ever after having discovered the truth about treasure; that it is to be found in the sky above, the open sea and a pair of bright eyes.

RKO had to scuttle its plan to present this film as a 1946 Christmas-season attraction when a strike at the Technicolor processing plant delayed the making of prints. Needing a black-and-white movie for its 1946 yuletide schedule, RKO chose a film destined to become a holiday perennial: Frank Capra's It's a Wonderful Life.

The Hedda Hopper Show — This Is Hollywood broadcast a 30-minute radio adaptation of the movie on March 29, 1947 with Douglas Fairbanks, Jr., and Maureen O'Hara reprising their film roles.

Not to be confused with this most remarkable, extraordinary fellow.