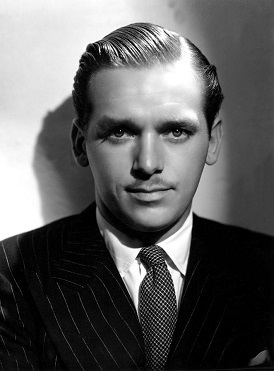 "I never tried to emulate my father. Anyone trying to do that would be a second-rate carbon copy."
Advertisement:

Douglas Elton Fairbanks, Jr. KBE DSC (December 9, 1909 – May 7, 2000) was an American film actor who made frequent appearances in The Pre-Code Era and The Golden Age of Hollywood. He made many appearances in popular Hollywood classics, such as Gunga Din and Sinbad the Sailor, and is commonly associated with his father Douglas Fairbanks, who made a large impact in Hollywood history.

Arguably through nepotism, Fairbanks was signed to Paramount Studios as a young teenager because of his father's successful career. As a young adult, he had many supporting roles in silent films that starred many big-name actors at the time, but was soon boosted into super-stardom when Hollywood moved to sound pictures in the movies Our Modern Maidens, and A Woman of Affairs in the late 1920s. Fairbanks moved to Warner Bros. in 1930 and made three films within two years with two of them being successful. He briefly left Hollywood to appear in British films and returned for The Prisoner of Zenda and Gunga Din, cementing him into being type-casted in action movies.

When World War II broke out, Fairbanks joined the US Navy. He remained in the army until retiring long after the war ended in 1954 as Captain, receiving many awards for his bravery and tact from the US, France, and Brazil. In between this, he made frequent appearances in UK films and television, admitting he'd fallen in love with the island as an Anglophile, and was even given an Honourary Knighthood in 1949 as well as other awards from the Royal Family. He notably presented a joint UK/US anthology television series called Douglas Fairbanks Presents, which featured an All-Star Cast from films and television.

In the 1960s onwards, Fairbanks made frequent appearances on stage and television with his last film was Strong Medicine in 1986. He appeared on the UK version of This is Your Life and published an autobiography in 1988. He died in 2000 from a heart attack and his body was placed in the same tomb as his father's.