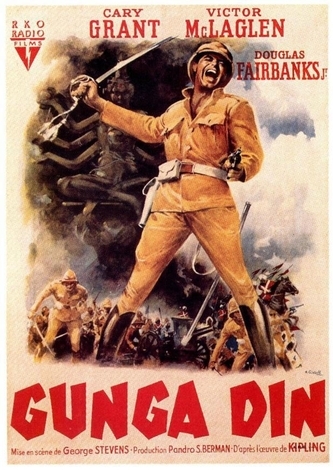 Gunga Din is a 1939 adventure movie inspired by the works of Rudyard Kipling. It stars Cary Grant, Victor McLaglen, and Douglas Fairbanks Jr. as a trio of English soldiers stationed in 19th-century India, with Sam Jaffe as the native servant Gunga Din. It was directed by George Stevens.

It's the height of The Raj, and telegraph wires are the most important tool in maintaining order and keeping everything shipshape. So when telegraph wires to a remote outpost have been sabotaged — under mysterious circumstances, no less — it's up to a troublemaking trio of officers to investigate. Although hot-blooded and perhaps impetuous, Cutter, McChesney, and Ballantine are recognized for having a lot of smarts, plenty of courage, and a good gut instinct between them. So they're sent off in service of Queen and Country. But there's a time limit on this adventure, as Ballantine has to get married, and possibly end their camaraderie for good. So, obviously, Cutter and McChesney have to stop him!

Along the way, they'll meet with a slightly petulant elephant, cultists as mysterious as they are deadly, and an Untouchable native named Gunga Din, who, despite all odds, cherishes a dream of being a noble soldier.

Alfred Newman composed the score. A pre-stardom Joan Fontaine plays Emmy, Ballantine's bride-to-be. Semi-remade as the 1962 Western comedy Sergeants 3, which recasts the main characters as U.S. Cavalry sergeants in the 1870s and stars the members of the Rat Pack. Some of the plot points—a murderous Thuggee cult, bloodthirsty Kali worshippers, a Rope Bridge—were lifted for use in Indiana Jones and the Temple of Doom.