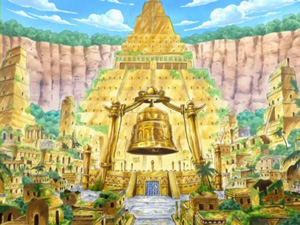 "It won't be much longer. El Dorado could be only a few days away. No more rust on the cannon. We shall shoot our enemies with golden bullets. And you, Okello, will serve food on golden platters."
— Don Fernando de Guzman, Aguirre, the Wrath of God
Advertisement:

This is a place where what we consider wealth — precious metals, jewels, ivory, cappuccinos, iPods, etc. — are everywhere and in great abundance. There's likely No Poverty, the only kind of "filthy" the "beggars" will be is filthy rich; and the most ramshackle building could put a pharaoh's tomb to shame. And the kings? They'd make Croesus green with envy. Richie Rich would probably find the place ostentatious and tacky. It makes Fluffy Cloud Heaven look practically spartan in comparison. When people say it's where the roads are paved with gold, they're talking literally. In some cases, even the inhabitants themselves are made of gold. Visitors like the Intrepid Merchant, Mr. Vice Guy and Guile Hero may become rich after visiting this place with little more than a pouch full of the precious gems lying on the ground, it's so rich. We could go on, but basically this is the Treasure Room as an entire city or even country.

The City of Gold usually has one of two rather strange sets of local economics. In one, despite the wanton abundance of riches, everyone still considers gold and rubies to be valuable. This can be especially pronounced because the City of Gold is usually a Hidden Elf Village that isn't trading with the outside world. This usually happens in works aimed at children that can't spend the time on a proper economic lecture on the effects of scarcity or excess on a local economy.

The other has the logical effect of this cornucopia of wealth, everyone in the City of Gold will consider these luxuries to be Worthless Yellow Rocks at worst and costume jewelry at best. What they'll really value are things that are useful, actually rare, or truly valuable, like pencils, art, and kindness. As you can guess, this location is some of the most fertile ground to plant An Aesop.

If the City of Gold is not a hidden elf village, they may be shrewd enough to create an artificial scarcity by only trading a little of their riches with the outside, to avoid collapsing their economies and rendering their wealth worthless to all. Or they might just let the Funny Foreigners load up a gold-plated wheelbarrow with diamonds and send them on their way.

Has nothing to do with the second The Tripods novel The City Of Gold And Lead.