Anime / The Mysterious Cities of Gold 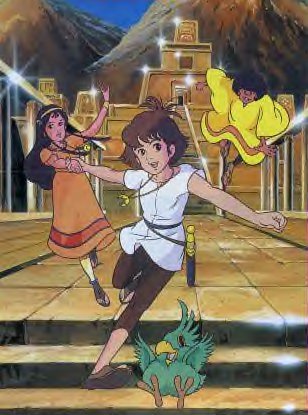 Children of the sun
See your time has just begun
Searching for your ways
Through adventures every day
note Left to Right: Zia, Esteban, Kokapetl and Tao
It is the 16th century. From all over Europe, great ships sail west to conquer the New World, the Americas. The men eager to seek their fortune, to find new adventures in new lands. They long to cross uncharted seas and discover unknown countries... to find secret gold on a mountain trail high in the Andes... They dream of following the path of the setting sun that leads to El Dorado, and the Mysterious Cities of Gold.
— Opening Narration
Advertisement:

The Mysterious Cities of Gold (Japanese: 太陽の子エステバン Taiyou no Ko Esuteban, "Child of the Sun, Esteban"; French: Les Mystérieuses Cités d'or), is a Franco-Japanese co-production between DIC and Studio Pierrot, originally airing on Japan's State Broadcaster, NHK, from 1982 to 1983. In North America, the series aired in English on Nickelodeon from 1986 to 1990 and in French on Radio-Canada and Télé-Québec, where it ran in reruns for several decades and was a staple of the channel. The English version has also been broadcast in the UK, Ireland, Australia, New Zealand, and some southern African nations. Back in Japan, NHK reran the series in 1998 with a new Japanese dub (actually a redub from the French version, as the original Japanese dialogue track had been lost), with only Masako Nozawa (Esteban) reprising her role from 1982.

Unlike other DIC collaborations with Japanese studios, the '80s series is considered anime due to having premiered in Japan first, although it was an international coproduction from the start. The result was a series that became a cult classic in the West despite quickly falling into obscurity in Japan.

After the conclusion of the first season, thirty years passed before it was announced that the series would be returning to air. Three new seasons were announced, with the first of these airing in 2012, and the second airing in the fall of 2016. These latter seasons picked up the plot from where the end of the first season left off, and continued the story instead of rebooting it. The original series still retains a large fan following, although reception of the later seasons has been mixed. The later seasons are French/Belgian/Canadian co-productions with no Japanese involvement and are thus not considered anime, although they do use the original Toshiyasu Okada character designs and another Asian studio, Wang Film Productions, participated in series two.

The Mysterious Cities of Gold is notable in its disregard of Never Say "Die" and Gosh Dang It to Heck!, two tropes which have dogged American cartoons well into the present day. Uniquely, each episode was followed by a short documentary exploring subjects related to the episode, although this segment was not always broadcast (especially in the United States-aired version).

The story begins in the year 1532, and initially focuses on the legends of El Dorado and the conquest of the New World by the Conquistadores. These events are seen through the eyes of Esteban, a boy raised by the monks of the Cathedral in Barcelona who posseses two unusual things: An amulet shaped like a crescent moon, and the ability to summon the sun. Following the death of his caretaker, Esteban departs for the New World in search of his family. Along the way, he meets Zia, Tao, Mendoza, Sancho, Pedro, and Kokapetl. Together, this unlikely band sets out to find the cities of gold.

Halfway through the first season, the tone of the story begins to change from a mostly-historical narrative to a more fantastic one with the discovery advanced Precursor Mayincatec technology. First the solar powered ship Solaris, and later the Golden Condor, who would become one of the show's icons. The first season culminates in a battle with the mysterious Olmecs, and the discovery that the Cities of Gold were built by Tao's ancestors, the people of Mu. This tone continues into seasons two and three, focussing primarily on the search for the Cities of Gold and the technology of Mu. Season Two introduces a new villain in Zares, a mysterious hooded figure who seeks the cities for his own purposes. It also reveals a startling fact about Esteban's history – He is an Atlantean, the ancient enemies of Mu.

For many years, it was thought that the English dub of the series had been lost, however in 2008 an English DVD was released in the UK, with a North American release in 2009. Two games have also been released: Flight of the Condor, a mobile/iOS game, and Secret Paths, A PC game that was later released on the iOS, Wii U, and Nintendo 3DS.

Compare to Future Boy Conan and Nadia: The Secret of Blue Water, two other anime with similar themes, both also aired on NHK. Many of the production team had previously worked on The Wonderful Adventures of Nils, which had also aired on NHK and on Radio-Canada.

The Mysterious Cities of Gold provides examples of: